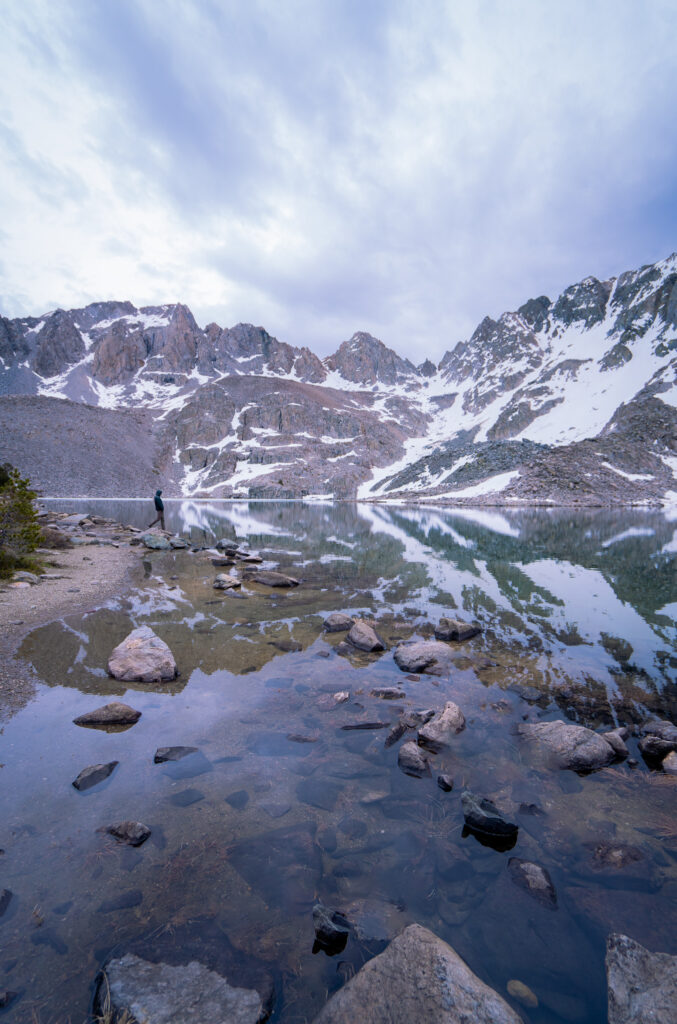 Backpacking Duck Pass To Pika and Purple Lakes via the Duck Lake Trail is about 17 miles. This trail gains roughly 3,556 ft of elevation and is a moderate trail with decent foot traffic. This is a point to point trail that crosses up and over Duck Pass. This trail meets up with the John Muir Trail (JMT) and Pacific Crest Trail (PCT) for a few miles towards Purple Lake.

If you’re interested in hiking just to Pika Lake: The Duck Pass to Pika Lake Trail is a 9.5 backpacking and hiking trail that climbs 2,132 feet of elevation and is rated a moderate out and back trail on AllTrails.

If you want to just go to Purple Lake and skip Pika Lake: Backpacking to Purple Lake via the Duck Lake Trail is 15 miles out and back. This trail gains 3,323 feet of elevation and is also rated as moderate. You can check it out here on Alltrails

Permits are required for all wilderness trips taken in the Sierra Nevada Mountains, and are broken up into different permits based on the area your  trip is in.

For Backpacking to Pika and Purple Lakes: The Duck Pass area is considered to be a part of the Inyo National Forest reservation system and can be found at recreation.gov. 60% of the permits are available to the public 6 months ahead of time.

On a rolling basis, the other 40% of permits open at 7am two weeks before the start date of your trip.

↟ Campfires might be restricted during your backpacking trip. Make sure to check in on the restrictions online prior to your departure and see if you are able to obtain a free campfire permit.

↟ There is potential for snow on Duck Pass. This area of the trail is the most dangerous just because one area is a bit exposed. You may run into some snow on the North side of Pika lake and on the PCT/JMT side of the trail. 2021 was a low snow year, but we did still bring crampons and snow baskets. I wore mine on the way up but we were able to glissade on the way down.

↟ The earlier you are able to cross snow fields, the easier it is. Once the snow gets soft you may “post-hole”. Which means your legs and foot go straight down. This can be very tiring to walk in and might get your shoes and gear wet. Try to get an early start while the snow is still cold.

↟ Drones are not allowed.

↟ Choose a campsite at least 100 feet away from lakes, streams, or trails.  It is very important to do this in order to protect fragile ecosystems. There were several people who chose to camp on the river bed of Pika Lake.

↟ Check the weather conditions, and be prepared for anything! We were forecasted to have clear skies the entire trip and ended up in a rain/lightning storm on our first night for several hours.

↟ Recreate Responsibly, and Leave No Trace. Stay on trail, don’t cut switchbacks, pack out your TP and trash, and be a good nature-loving individual.

Trail Type: Out and Back

We drove towards the Mammoth area through Sonora Pass, making it to the area pretty late on Memorial Day weekend. We stayed in the BLM land in the area near the hot springs. You can find more information about camping here in my Eastern Sierras Roadtrip Blog.

Our trip started just after sunrise with a pre-backpacking coffee and pastry at Black Cabin Coffee in Mammoth. They have incredible waffles that hit just the spot when your camping. When we got to the trailhead, there were a few other cars there and a very packed campground. After organizing our packs, we started the trail.

We saw a few other people as we made our way past the first lake and towards Barney Lake. The elevation gain was constant but steady. There were a few people fishing and camping at Barney Lakes, and we saw two other groups up on Duck Pass crossing up and over the snowy sections. At the pass, I did change into micro spikes and felt a lot more comfortable with a traverse over a bit of an exposed section. We passed another backpacker coming down, and he informed us that after the pass snow would not be a big issue.

After getting to the top of the pass, the views were beautiful. Duck Lake was still covered with patches of ice, and Pika Lake could be seen in the left corner. We stopped for lunch to take in the views and enjoy the sunshine. The trail was a bit busier up near the Pass, and we passed a decent number of day hikers.

Crossing over into Pika Lake, there was a few patches of pretty deep snow. Although it was only around noon, the snow was soft enough that we were post-holing just about every step. After the snow, we only had a few more steps until we reached the lake! Reid stopped to frantically tell me to get my camera. There was a Marmot a few yards away from us, but sadly my camera gear was a little more packed than I expected, so he skirted away before I could get a clear shot!

We set our tent up behind a bundle of trees on the Northern side of Pika Lake. We were all set up by 2PM, which left us a lot of time to hang out by the water. Up until about 3PM, we had the lake to ourselves. There was a family of three that set up a tent on the riverbed (please don’t do this by the way, it harms fragile ecosystems) that were fishing for most of the time we were there.

Despite the forecast of blue skies, we could see a dark, swirling sky moving its way east towards us. Within the hour, the storm was right next to us, blowing a fierce cold spell into the lake and a few patches of rain. I think Mother Nature was trying to make a point, because we left our rain gear at the car without a second thought.

The dark clouds stayed around for most of the night, but there was a thin strip of blue on the Eastern horizon, this kept me hopeful to see the pink mountain tops that I love- and it didn’t disappoint!

The next morning, we packed up camp and headed out towards Purple Lakes. Within a few miles, we were at the far side of Duck Lakes and could see the incredible valley on the other side. After the trail headed down into the canyon, it met up with the PCT and JMT. There were a few other patches of snow we had to cross over, and one really small section of loose rock. The trail flattened out here for a while and it was nice to take a breather as we went around the mountain, and down towards Purple Lake.

It was still really early by the time we got here, and we set up our tent in one of the first open spots we saw. After spending much of the afternoon reading in the sun, we walked down near the water for Reid to jump in. We could hear the splash of a stream nearby, and after Reid exclaimed about a school of fish I walked over to the stream to investigate. A school of Rainbow Trout were splashing around, trying to swim upstream. Most were stuck behind the same section of slick rock and rushing water, and we sat there for a long time watching them.

It was an early night for us, and Reid was asleep by sunset. I stayed up to watch the sunset- but was asleep soon after.

In the morning, I made myself some morning oatmeal and some powdered chai that I kept in a (leaking) bag at the bottom of the bear car. We packed up camp a little while later and made our way back towards Duck Pass. By 10:00, we made it to the top of Duck Pass. It was much easier coming down, and scoping out the best sections to go to. The snow was still hard and cold enough we could glissade down and Reid took this as his opportunity to show off his boot-skiing skills.

There were several groups of hikers that we passed going down past Barney Lake and towards the parking lot, much more than when we arrived! The weather was perfect, and everyone was out enjoying it with their families. Once we got back to the car, we took a quick breather and drove off for our post hike treats including Black Cabin Coffee (again), milkshakes, and some brews from June Lake Brewing.

Have any questions or comments about this trail? Leave them below! 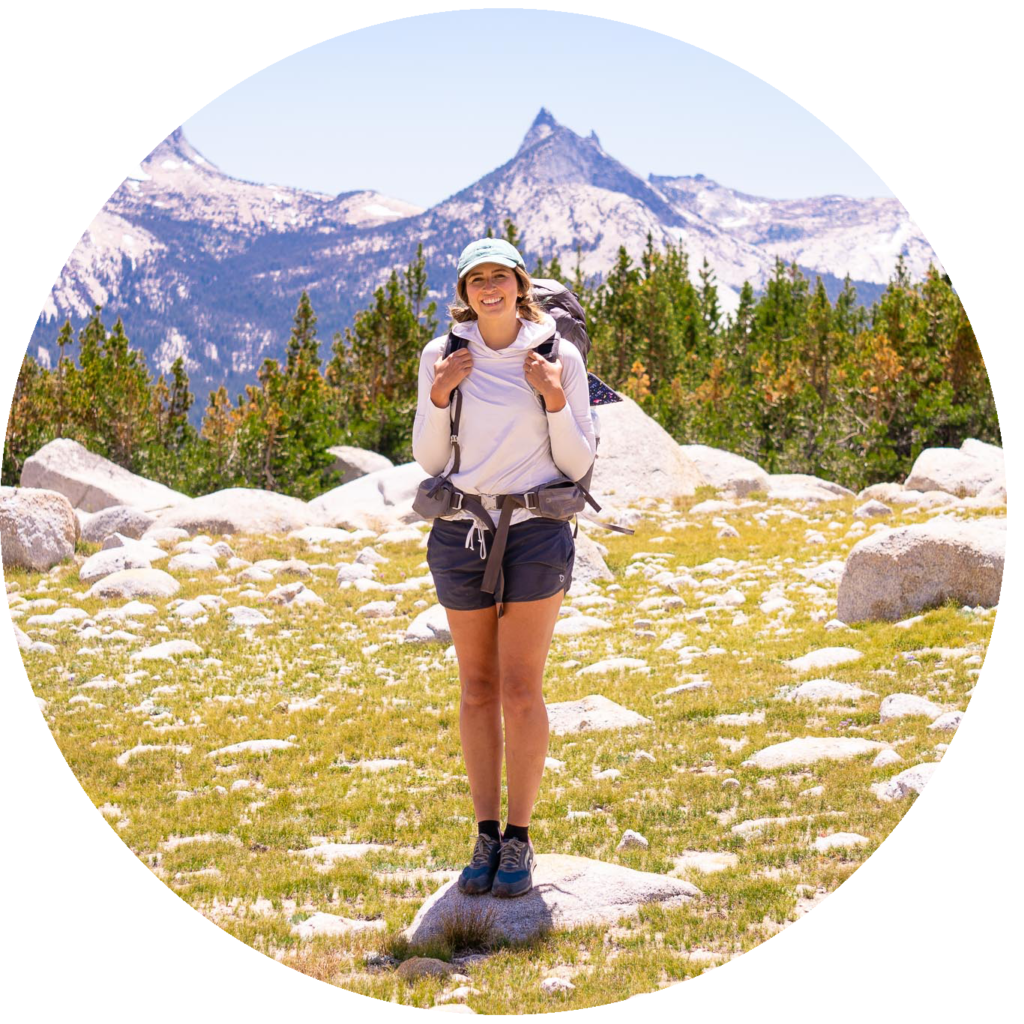 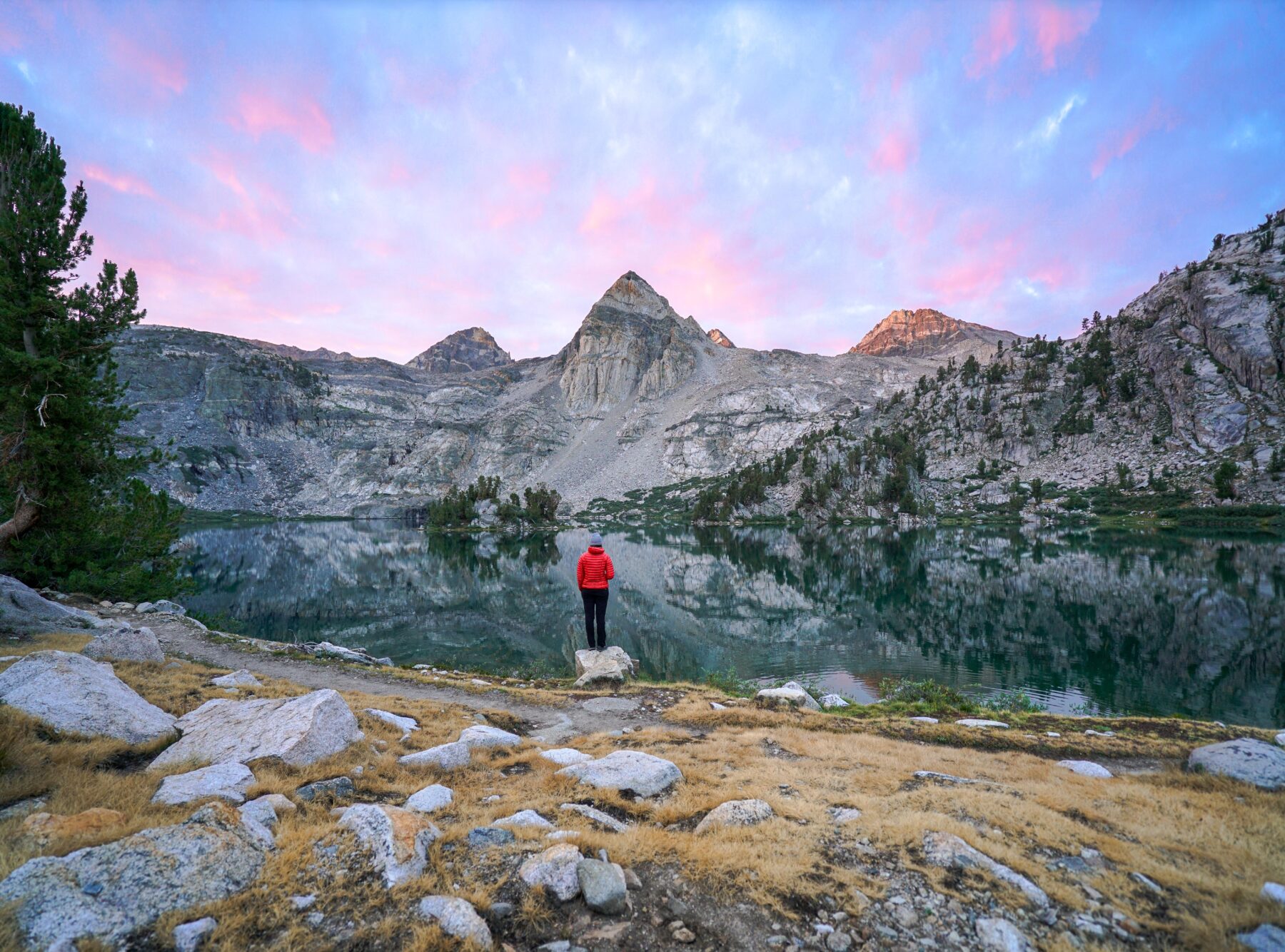 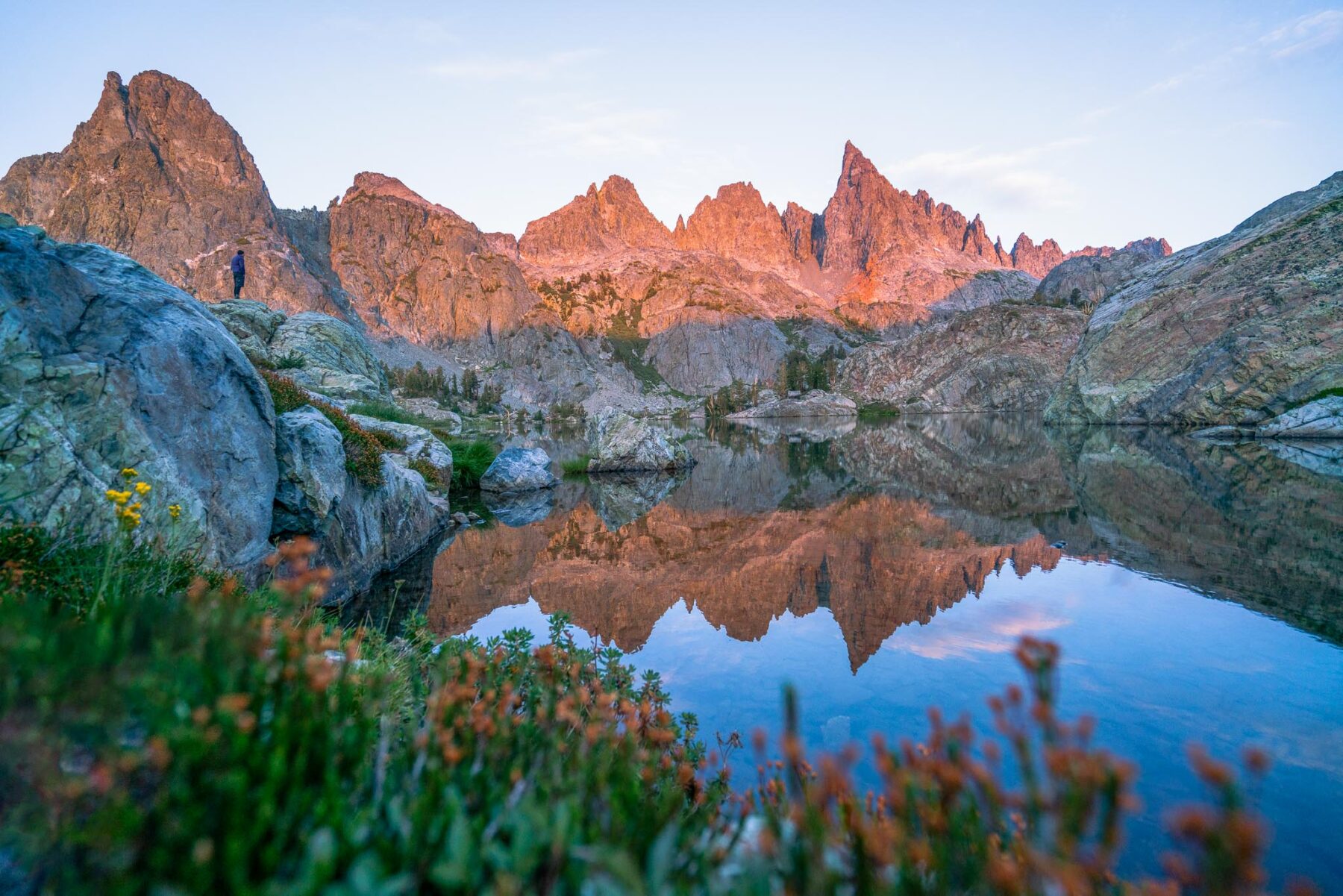 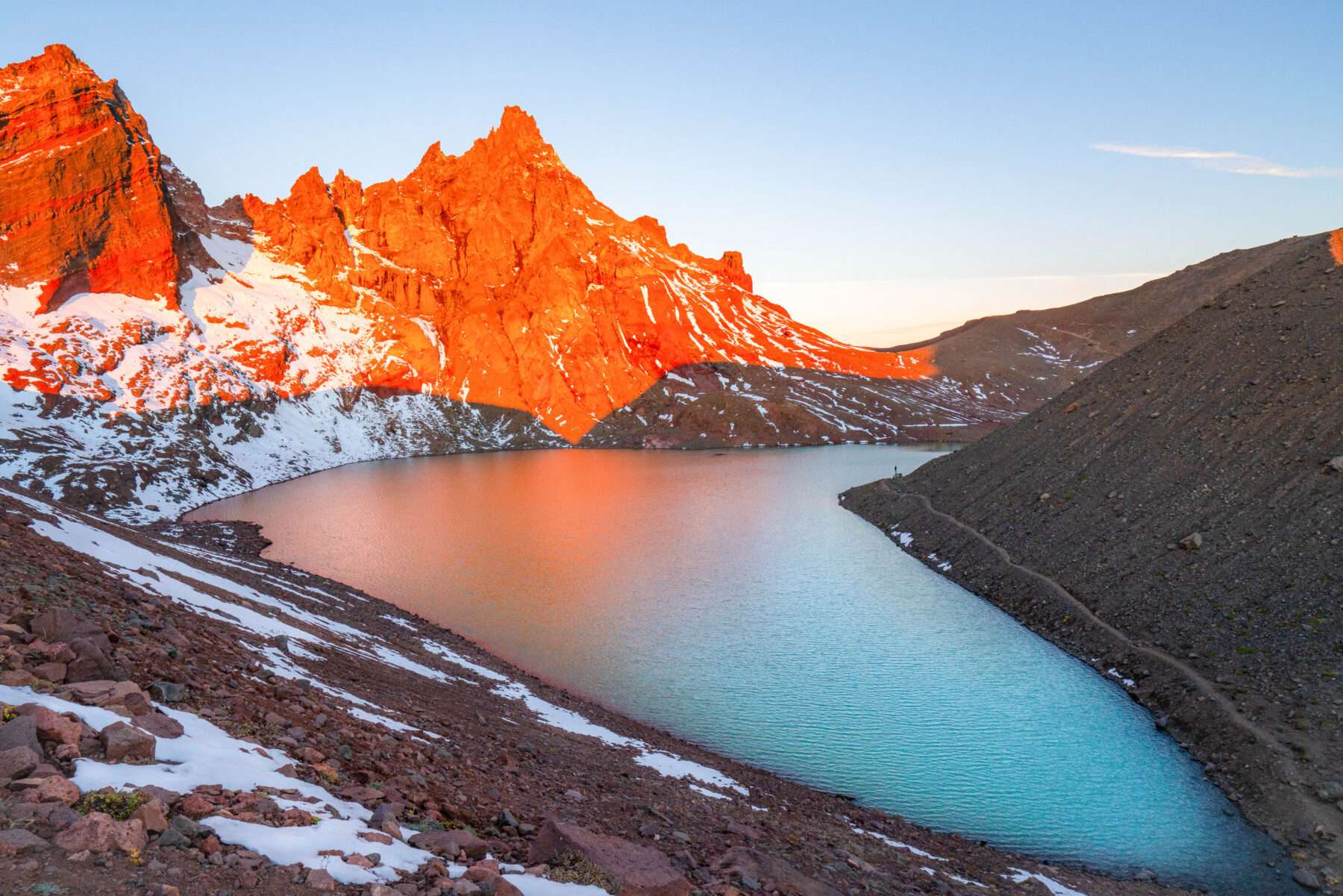 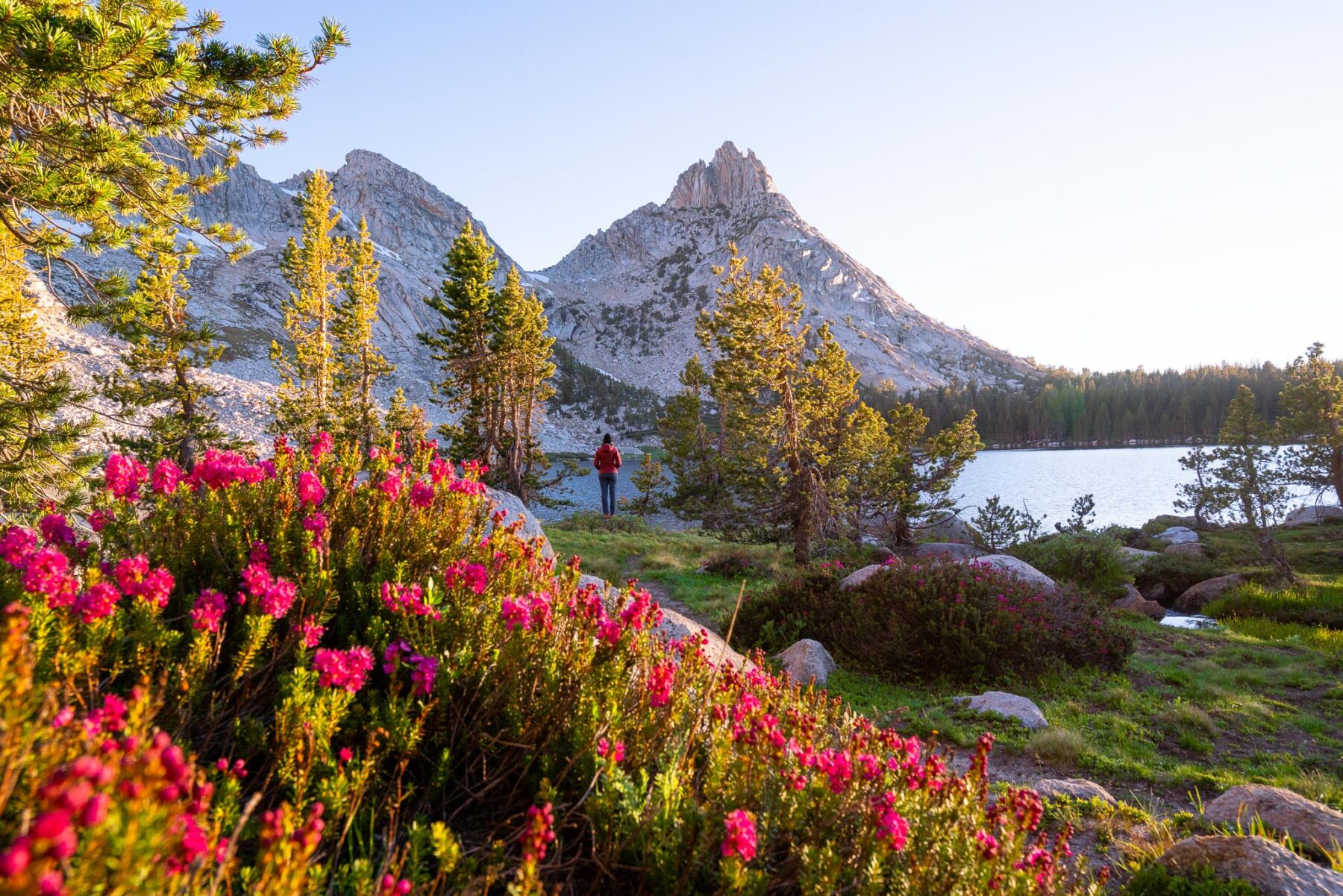